THE MOST HOLY VIRGIN MARY, MOTHER OF GOD AND THE CATHOLIC ANGLICAN CHURCH

The Church in the British Isles was founded by the Blessed Virgin Mary in the year 63 of our era, when she arrived at the island of Glastonbury accompanied by St. Joseph of Arimathea, evangelized the natives of that island, and they built the first Christian temple, and dedicated it to the Virgin Mary.
The holy, catholic and apostolic Church was established in Glastonbury on the same date that St. Peter was martyred in Rome.
This Church is that which later spread to other islands of the British archipelago, to which belonged the Bishops who went out to receive St. Augustine (Not of Hippo) when he arrived in those territories sent by St. Gregory the Great.
The Traditional Anglican Church of the Blessed Virgin Mary, maintains the tradition, and the faith, of the One, holy, catholic and apostolic Church, founded by the Blessed Virgin Mary in the British Isles.
We have no connection with the See of Canterbury. We do not use the Book of Common Prayer of the Anglican Church, as it originates from the Protestant Reformation carried out by Thomas Cranmer, at the request of Henry VIII. We reject the political and economic management of the faith of the Church by the rulers of the day.
We worship God with the Venerable Sarum Rite, also known as the LITURGY OF OUR HOLY FATHER SAINT GREGORY or the LITURGY OF THE WESTERN ORTHODOX RITE.

The Traditional Anglican Church of the Blessed Virgin Mary remains faithful to the fervent devotion and love for the Ever Virgin Mary, Mother of God, present from the very origin of the Anglican Catholic Church.
The Virgin Mary, answering YES to God, and accepting to carry in her womb the God-Man, becomes the Living Ark of the Living and Eternal God, in her dwells the Fullness of God's Grace, and in her is fulfilled the promise given by God in Genesis, that the ancient serpent which is the devil, would be defeated by Mary and her Son Christ.
The Catholic or universal Church arrived in England, for the love of the Virgin Mary, so the first Christian temple was built there, and it was dedicated to the Virgin Mary.
Even today there are still vestiges of the first Christian temple built, which was in honor of the Ever Virgin Mary, Mother of God.

This ecclesiastical Province, which is part of the Apostolic Episcopal Church, arises as an expression of fidelity to the faith, tradition and order of the Anglican Catholic Church established in the year 62 of our era on the British island of Glastonbury, as a result of the evangelizing work of St. Joseph of Arimathea.
We, like the Anglican Catholic Church in its origins, love and profess our devotion and admiration to the Blessed Virgin Mary, Mother of God.
We are present in several cities of Ecuador, and also in other countries of Latin America, North America and Europe.
We use in our worship to God the Sarum Use, we do not use the Book of Common Prayer that is proper of the Anglican Reformed Churches, we are Anglican Catholics.
The Sarum Use was the rite used in most of the English territory, until before the Protestant Reformation of Thomas Cranmer and Henry VIII. 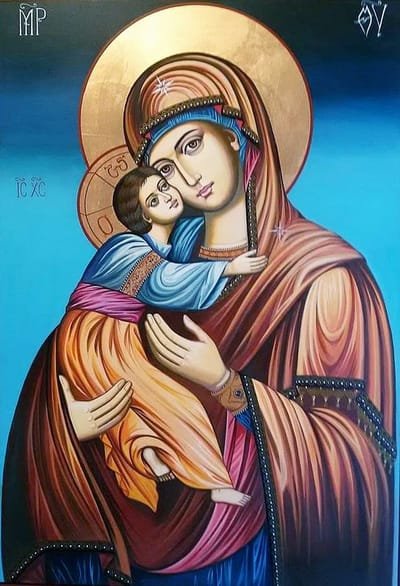 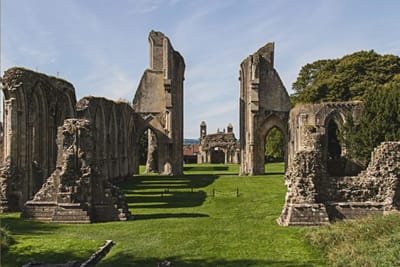 OFFICE OF THE PRIMATE AND PRESIDING BISHOP 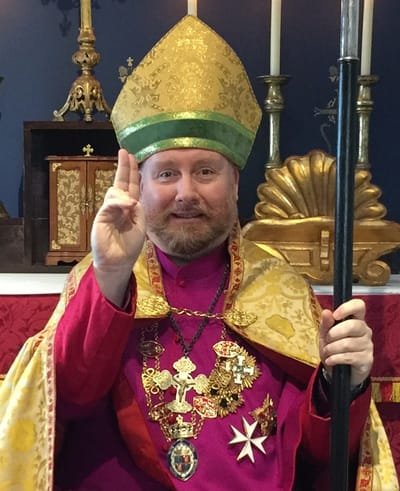 In Great Britain, under Archbishop John Kersey, the AEC has pursued each of its main mission priorities: ecumenical outreach and fellowship, inter-church collaboration, and practical ministry both through mission parishes and through the work of individual clergy. Archbishop Kersey, an Anglican by birth and like Archbishops Persson and Spataro a former schoolteacher, has also concentrated attention on the AEC’s intra-church role, with increasing international interest in its research and scholarly work thanks to the development of the Internet. His education includes degrees and diplomas from universities and colleges in Britain, Africa and Latin America. In 2008, he received the degree of Doctor of Divinity from St Ephrem’s Institute of Eastern Church Studies, Scandinavia. He is the Chancellor of European-American University, Bunyoro-Kitara, and of its division the Western Orthodox University, and holds a number of consulting and honorary professorships, notably at the Universidad Empresarial de Costa Rica where he is a Full Professor in the International Program.


Dr Kersey was appointed Archbishop of Great Britain in the AEC in succession to the late Archbishop George Boyer in 2008, and has also served ministerial roles in the Ancient Catholic Church, Liberal Catholic Apostolic Church and the Ecclesia Apostolica Divinorum Mysteriorum, the latter ministry being a manifestation of the inner church tradition (in which he has a particular interest) founded by him under charter from the AEC in 2010. In 2011, he was elected the eighth Prince-Abbot of San Luigi (an office once held by Archbishop Joseph René Vilatte) with the regnal name Edmond III, and as such is Grand Master of the Orders of the Crown of Thorns and of the Lion and the Black Cross, and Superior-General of the Order of Antioch.


His books, all of which are published by European-American University Press, include Arnold Harris Mathew and the Old Catholic Movement in England 1908-52 (2010), and Joseph-René Vilatte (1854-1929): Some Aspects of his Life, Work and Succession (2011). His research into the historic independent churches has resulted in many biographical articles on particular bishops, some of which are now available online.
In July 2014, Archbishop Kersey was elected co-adjutor with right of succession to the Primate and Presiding Bishop of the AEC, and succeeded as the fifth AEC Primate upon Mar Timotheos III’s retirement in February 2015. His Eastern designation as Primate is Mar Joannes Edmundus.

The Province of the Blessed Virgin Mary is a part of the Apostolic Episcopal Church, which is holy, catholic and apostolic. It professes and practices a deep devotion and love for the Ever Virgin Mary, Mother of God. We are Orthodox in faith - Catholic in practice - Anglican in perspective. It will.

OFFICE OF THE PRIMATE AND PRESIDING BISHOP

END_OF_DOCUMENT_TOKEN_TO_BE_REPLACED

Archbishop Edison Raúl Narváez Guerra DD, OCR. Co-adjutor to the Primate and Presiding Bishop, and Provincial Archbishop of the Province of St Mary the Virgin. Titular Archbishop of Hebron; Patriarch of Malaga in the Catholicate of the West

END_OF_DOCUMENT_TOKEN_TO_BE_REPLACED

DIOCESE OF OUR LADY OF GUADALUPE

END_OF_DOCUMENT_TOKEN_TO_BE_REPLACED

SUFFRAGAN DIOCESE OF OUR LADY OF ALL GRACES

END_OF_DOCUMENT_TOKEN_TO_BE_REPLACED

SUFFRAGAN DIOCESE OF OUR LADY OF MOUNT CARMEL

END_OF_DOCUMENT_TOKEN_TO_BE_REPLACED

The Province of Santa Maria Madonna is committed to serve every person in need, especially the poor, the marginalized, the excluded, the terminally ill, the victims of domestic violence, the victims of state violence, the unemployed, the addicts, etc.
To fulfill this mission, as well as to bring the Gospel of Salvation in Jesus Christ, the One Lord and Savior, we need to invest financial resources every month.
For this reason we invite you to be part of this effort and contribute financially to this Church. Every dollar you give will result in the salvation and blessing of many people.
Donate now and save lives!

If you are an ordained minister in any of the three orders: Deacon, Priest, or Bishop, in one of the Churches that maintain the Catholic tradition, faith and order, fill out this form, and we will contact you.
We welcome you to the Traditional Anglican Church of the Virgin Mary, a true Church, Holy, Catholic and Apostolic.
We incardinate servants of God regardless of their marital status, their place of residence and even less their immigration status in the country where they are living.

You must present via email and by mail the documents that certify your theological, pastoral, and civil studies; as well as you must accredit with documents, the reception of your sacred orders to the ministry.
The condition of his civil status must also be accredited with sufficient documents, as well as not having been judged for any criminal offense.

The ministers who are incardinated in the Traditional Anglican Church of the Virgin Mary will receive for the exercise of their religious activities, the emoluments proper to their every religious minister.
Likewise, they will be able to receive the contributions of the volunteers of the foundations FUNDEJPAZ and SAN PANTALEÓN.

It will be part of a truly Holy, Catholic and Apostolic Church, integrating itself into a Church that maintains tradition, faith, liturgy and sacred Catholic, apostolic orders.
You will be part of a select group of ministers of the Kingdom of God, who are conquering the world in the Name of the Lord Jesus, bringing thousands of people into submission to the lordship of Jesus Christ.

Establish, pastor, disciple, the people that God will put under His loving care.
To represent the Traditional Anglican Church of the Virgin Mary in the area of influence of its ministry with holiness and integrity and with fidelity to the apostolic witness.

Proclaim the virtues of him who called us out of darkness into his wonderful light.
To worship God with the liturgy that we inherit from those who have gone before us in faith and love of God.
Disciple new converts and teach them by example, the way of holiness and service.
To be the Holy Catholic and Apostolic Church that welcomes all those who are thirsty, tired, and downcast and lovingly raises them up in the power of the Holy Spirit.

It should be a group of people who are already organized to serve and worship God.
They should also send a request for incardination to the Bishop Primate of the Traditional Anglican Church of the Virgin Mary.
They shall attach to the application the Act of Approval for the application for incardination, which shall be signed by the leader of the group.
They will also include a list of the lay members, clergy and ministries that the group has in its structure.
The real or personal property that they possess at the time of applying for incardination shall remain the property of the group to be incardinated.
The real estate that, once incardinated, is acquired with funds raised by the Traditional Anglican Church of the Holy Virgin Mary, will belong to this Church, but the right to use and usufruct corresponds to the incardinated group.

Those that it can generate through religious and social activities, through the representation in its zone of influence, of the Traditional Anglican Church and its social aid organizations.
It will also receive financial support to enable it to carry out projects that are approved by the Ecclesiastical Council of the Traditional Anglican Church of the Virgin Mary.
It shall remit one tenth of its income to the see of the Bishop Primate for the Common Ecclesiastical Fund, which enables action to be taken on behalf of the ministers of this church facing emerging crises.

By becoming incardinated into the Traditional Anglican Church of the Virgin Mary, you will be part of a truly Holy, Catholic and Apostolic Church.
It will also be part of a growing Church, with a presence in Europe and North America. We are committed to raising funds to share with our missions, churches and dioceses, so that they can serve their neighbors out of love.

This is one of the areas you can use for adding job responsibilities to your website. You can edit all of this text and replace it with anything you want to advertise about the jobs being offered by you and your company. Edit your Jobs page from the Pages tab by clicking the edit button.
Apply Now
I BUILT MY SITE FOR FREE USING